Principal International are delighted to advise that construction is underway on the Royal Albert Dock Hotel.

We have been advised that ground works commenced on the 10th February, reducing the levels and laying the piling mat. Piling is anticipated to commence during the second week of March and completion of the underground drainage will follow. 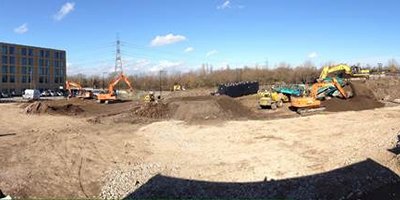 The steel podium that forms the shell of the ground floor and the platform for the room modules to be landed is due to commence during the third week of April.

The developer has advised completion of this phase is critical as the first modules of the bedrooms will be arriving in mid-May and loaded directly on to the podium deck. The fit-out of these modules is now advancing swiftly, some 6,000 miles away in the Guangdong province in China.


We understand that simultaneously, the design development process has been continuing, all of the bedrooms and bathrooms have been signed off. The final changes to the ground floor public spaces are being effected to improve circulation space and maximising the dining areas, with the hotel franchise having being closely involved in the process. The hotel operator has been working on the front-of-house areas, as well as back of house, to achieve maximum efficiency; the kitchen layout and equipment is now finalised, as are the areas such as offices, staff rooms and stores.

The Royal Albert Dock Hotel is now sold out, but Principal International have an excellent alternative hotel room investments to offer purchasers, with non status finance and a rental return of up to 11% NET.

For further information on the JQ Hotel, please click here.